Did you drink too much last night? We can help you feel better.

We have all been there, the morning after the night before where one drink was too many and ten drinks, apparently wasn’t enough! But what actually causes us to feel the way we do the next day? As a general rule, the more alcohol you drink the more likely you are to wake up with a hangover.

The symptoms of a hangover usually arise when your blood alcohol level significantly drops to near zero. Many different factors contribute to that feeling, dehydration, electrolyte imbalances, upset stomach, headache, nausea, to name just a few. Our Hangover Drip rehydrates, restores electrolytes and replenishes vital vitamins lost by alcohol. We can also add anti-nausea and anti-inflammatory med to provide you with even faster relief.

The liver receives the largest amount of alcohol because it receives blood directly from the stomach and small intestine through the hepatic portal vein. The liver is the primary site of alcohol metabolism; other sites include metabolization in the stomach by alcohol dehydrogenases and excretion in urine, sweat, and breath. The liver can oxidize one ounce of alcohol in an hour. 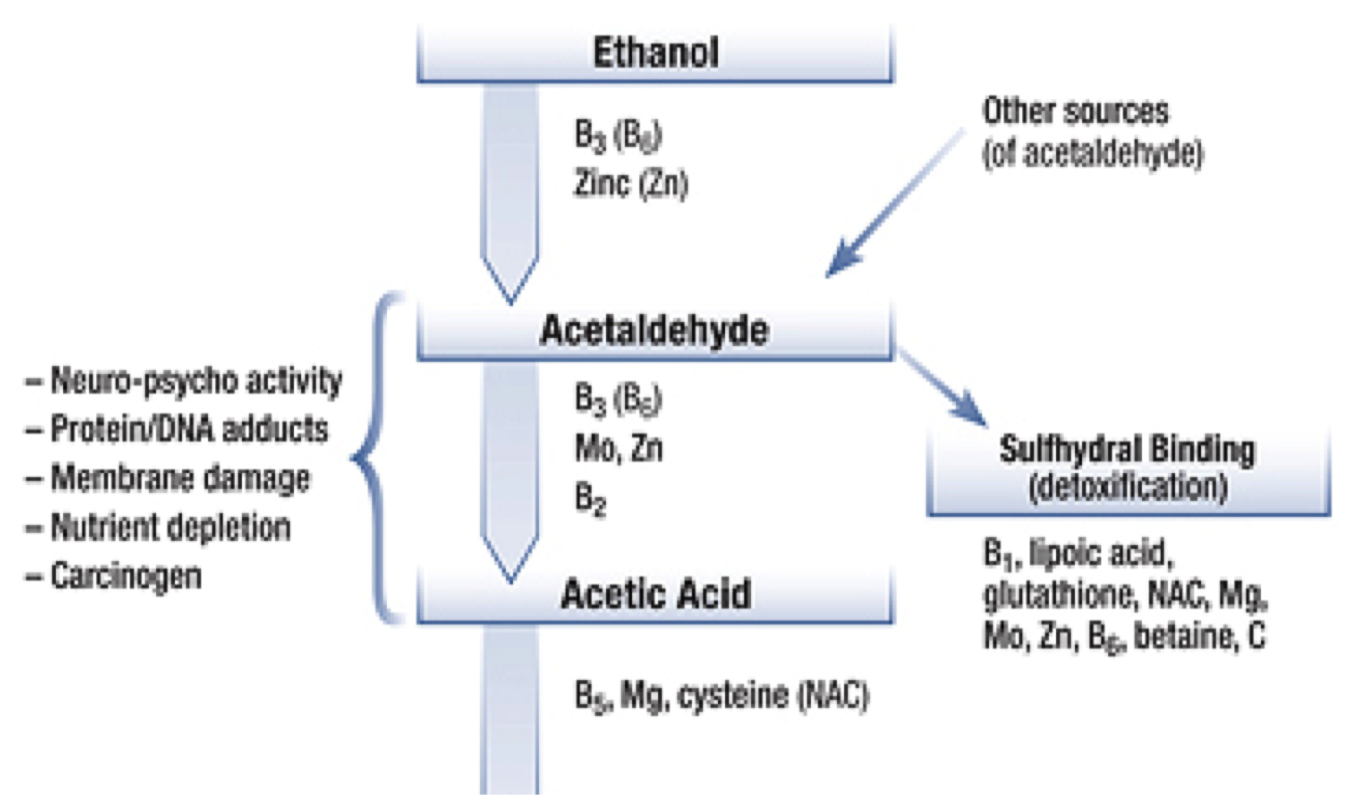 As you can see, alcohol detoxification requires a lot of micronutrients to detoxify which may cause a depletion in the short and long term.

Acetaldehyde is the compound that’s been implicated in hangovers. It’s a toxic compound, which is usually broken down very quickly into acetate. However, the enzyme that converts ethanol to acetaldehyde works faster than that which converts acetaldehyde to acetate, leading to a build-up of acetaldehyde if you have several drinks in a row. t’s been suggested that acetaldehyde’s toxic effects on cells may play a part in the development of hangover symptoms, particularly nausea, sweating, increased heart rate and headache.

It’s commonly assumed that these symptoms are largely down to dehydration after a night of drinking. It’s widely thought that alcohol does have a diuretic effect on the body, causing an increase in urination, and therefore water loss. It does this because it lowers the level of the antidiuretic hormone (ADH) vasopressin, which usually acts to increase the retention of water in the kidneys. Therefore, lower levels of ADH leads to increased urination and water and electrolyte loss.

Furthermore, recent research is now suggesting that our immune systems may also have a part to play in a hangover’s genesis. Studies have shown that alcohol can have an effect of cytokines, small proteins produced by cells in the body that help control the immune system and fight disease. It can increase the concentrations of certain cytokines in the body, causing ‘imbalance’ in the immune system that could result in symptoms such as headache, fatigue, and memory loss. Changes in hangover severity have been significantly correlated with the increased levels of some of these cytokines.

Thiamine, also known as vitamin B1, is an essential nutrient required by all tissues, including the brain. The human body itself cannot produce thiamine but must ingest it with the diet. In the body, particularly high concentrations of thiamine are found in skeletal muscles and in the heart, liver, kidney, and brain. In the tissues, thiamine is required for the assembly and proper functioning of several enzymes that are important for the breakdown, or metabolism, of sugar molecules into other types of molecules (i.e., in carbohydrate catabolism). Proper functioning of these thiamine–using enzymes is required for numerous critical biochemical reactions in the body, including the synthesis of certain brain chemicals (i.e., neurotransmitters); production of the molecules making up the cells’ genetic material (i.e., nucleic acids); and production of fatty acids, steroids, and certain complex sugar molecules. In addition, inadequate functioning of the thiamine–using enzymes can interfere with the body’s defense against the damage (i.e., oxidative stress) caused by harmful, highly reactive oxygen molecules called free radicals.

Thiamine produced by normal microflora in the large intestine is absorbed through a carrier mediated transport mechanism. While alcohol is primarily metabolized in the stomach and small intestine, it is assumed that the large intestine is exposed to alcohol from the blood side instead of the lumen side. As a result of this, alcohol exposure the transporter proteins are also not expressed at the mRNA and transcription level due to alcohol exposure Thiamin is important for pancreatic function because it is used by the pancreas as a coenzyme in energy metabolism.

Glutathione is referred to as the Master Antioxidant and it is also a key regulator of the immune system and of detoxification in all cells throughout the body. When glutathione levels are depleted due to alcohol consumption, the whole body suffers. Free radical damage increases, the immune system is weakened, and toxins begin to build up in the body.

The metabolism of alcohol is a two-step process that takes place in the liver. In the first step, an enzyme named alcohol dehydrogenase converts alcohol into compound named acetaldehyde, which is called an intermediate metabolite.

In the second step, an enzyme named glutathione-S transferase facilitates the joining of acetaldehyde with glutathione and the acetaldehyde-glutathione complex is easily excreted in the urine. When adequate levels of glutathione are available in the liver, alcohol detoxification goes smoothly. However, one evening of heavy drinking will quickly deplete the liver’s stores of glutathione.

The damage from excess drinking is not due to the alcohol, but rather, to the toxic effects from acetaldehyde. When glutathione levels in the body are not adequate to keep up with the amount of acetaldehyde being produced during the first phase of alcohol detoxification, acetaldehyde begins to exert its powerful damaging effects.

Zofran is a prescription medication used to prevent nausea and vomiting caused by chemotherapy or surgery. Zofran belongs to a group of drugs called serotonin 5-HT3 antagonists, which block serotonin, a natural chemical in the body, from causing nausea and vomiting. This medication comes in several oral forms: tablets and and solution (liquid). Zofran is also available in an injectable form to be given directly into a vein (IV) by a healthcare professional.